In the recent TV adaptation of Marvel Comic’s Daredevil – the Hell’s Kitchen crimelord Wilson Fisk acquires a white colourfield type painting.  The painting is more than just an acquisition. The  object, on which he regularly meditates, is  a touchstone for who he was (a child who stared at a blank white wall before helping kill his father),  who he is now (an emotional time bomb), and who he wants to be (a Renaissance man with a conniseur’s eye). The white painting is soon replaced by a blank white prison wall. 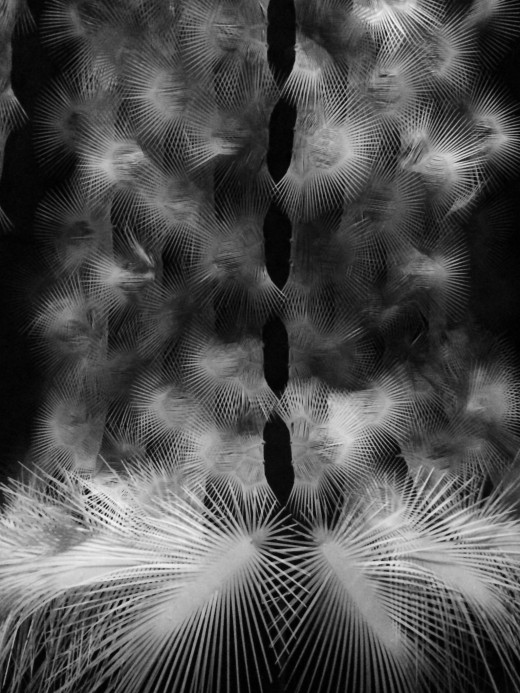 An object is never just an object.  Over and above the mundane stuff of daily life, the decisions we make as to what we acquire, hold or throw away say so much about us.  Income and availability limit our choice. We may aspire to own a Fabergé egg but have to make do with a Cadbury’s crème egg.   To allow us all a squeeze of the ermine, the glossary of luxury terms, once the preserve of the exclusive object has now been widely applied to the workaday. “Luxury” as a word has consequently been overexposed, prefixed to even the most mundane of items, such as fabric conditioner. Does luxury mean luxury anymore? 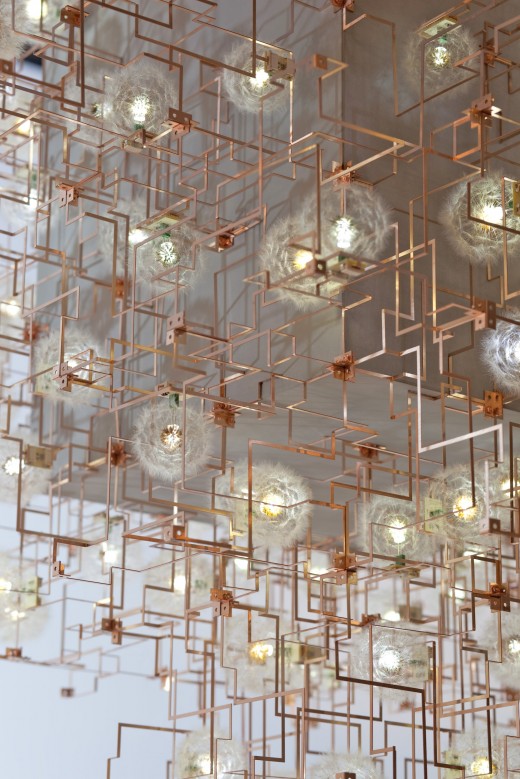 With luxury items like wine, cars, art and jewellery – any purchases of passion – there is a growing sense that we now know the price of everything and the value of nothing.  You only have to look at the Knight Frank Luxury Index 2015 to see that such acquisitions can have both upsides and downsides with regard to investment.

The close link between luxury items and the commercial world is not a new phenomenon and nor should the relationship be considered somehow distasteful – the production of art is dependent on its patrons.  High value brings with it high end labour, skill, exclusivity and often rarity – all marks of the luxury item. 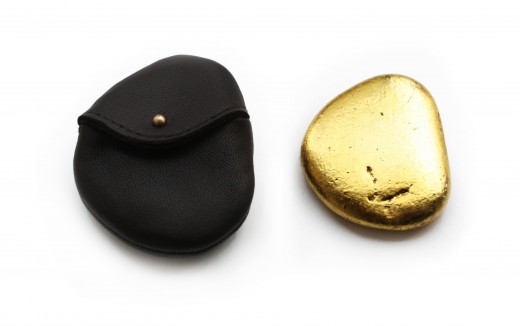 The response to “what is luxury?” is personal. The prevalent aspects for me were time, pleasure and space.  The “ideal stones ” (Dominic Wilcox, Luxury skimming stone with belt pouch, 2009, 24 carat gold leaf, leather, pebble) are not in themselves luxurious  per se but become so because of the activity they represent, the same for the Talaris Saddle (Hermes, Leather-natural calfskin and natural cowhide, carbon fibre,  thermoplastic,  titanium, 2010). 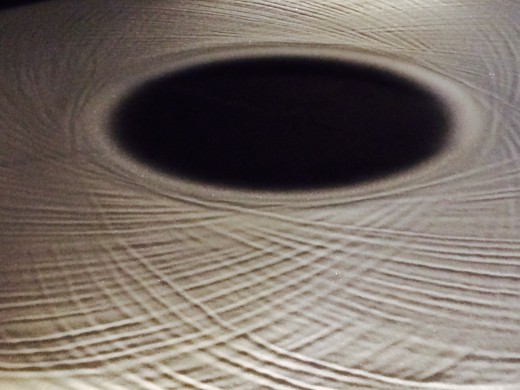 The object as an extension and legacy of the man also has a place within the exhibition. A recurrent theme of many recent exhibitions and artworks has been on collecting, the wunderkammer and momento mori (Damien Hirst- For the Love of God, Colnaghi-Old Masters- The Art of the Curious, Barbican- Magnificent Obsessions: the Artist as Collector). There is space here for folly and obsession (Golden Fleece head piece, Giovanni Corvaja, 2009, inspired by Jason and the Golden fleece which took 2,500 hours to make or Voltage Couture collection dress, Iris Van Herpen,  Japanese  polyester microfiber, matt polyester film,  2013). 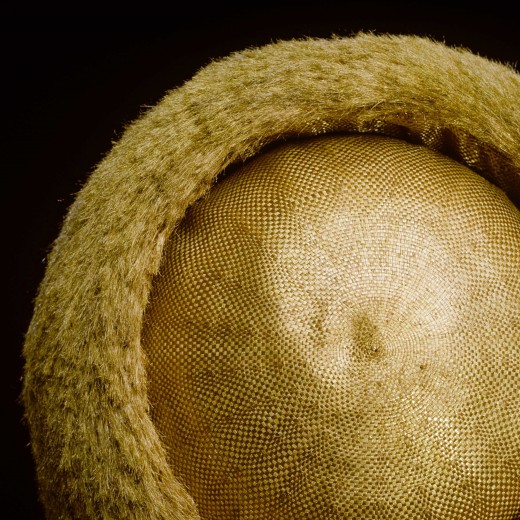 The delicate crown of Portugal, dated 1760- diamonds, emeralds, rubies set in gold, or Monkey business, (Studio job, 2013- Bronze polished and gilt, aluminium, Swarovski crystals, white glass, silver leaf, faience, paint , LEDs) both add opulence. The crystal monkey that guards or possibly steals from a chest of gold, as a piece shouts “This is me, I’ve made it”.  From Rococo singerie to the flying monkeys in the Wizard of Oz – monkeys mean trouble. To place your wealth in the hands of nature’s reprobates says it all.  This piece is a rare outbreak of humour – luxury does appear to take itself very seriously. 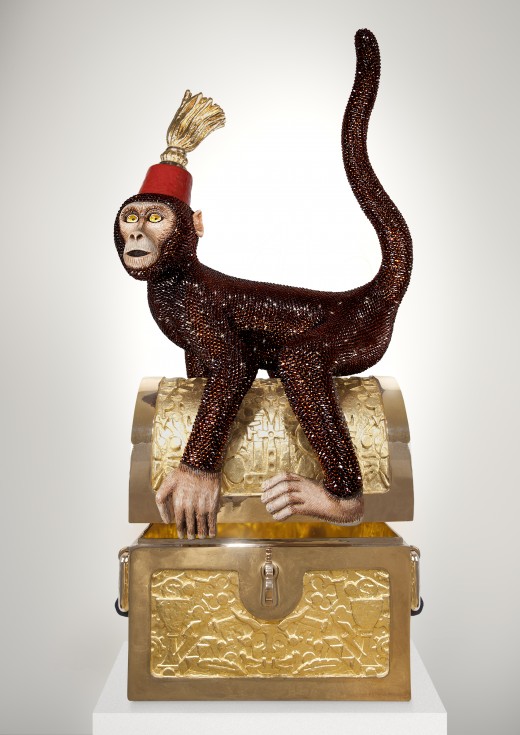 The exhibition centres around the installation, Time Elapsed, (Philippe Malouin for J& L Lobmeyr, polished brass, soda-lime glass beads, electronics, 2011) which tracks the passage of time making reference to the need for sand in crystal glass making. The theme of time continues in the many objects that have taken hours to create. The luxury being that the time poor commissioning party has the financial wherewithal to commission someone else to spend hours to create an item such as the Chasuble, (Venice- 1670-95, linen needle lace mounted on silk , or the “Funeral of a swallow” briefcase, 2015 inspired by 16th/17th Flemish flower garland paintings. 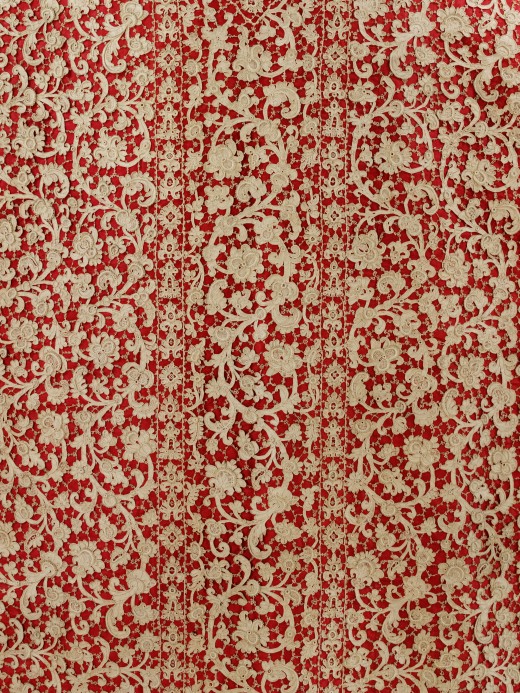 The future of luxury is also considered but appears hard to predict. Any backward glance at the history of luxury goods will know that fashions come and go depending primarily on market availability- spices, ice, salt, tulip bulbs, oysters, ultramarine pigment and even rabbit meat have all moved from  being/ or have become luxury items.

What is Luxury?- a V&A and Crafts Council exhibition, sponsored by Northacre, 25 Apr – 27 Sept

Black and white images – A. Gray,  all other images were provided by the V&A.