Walpole 2019 Brand of Tomorrow: The Restory

It’s not hard to see why The Restory has been named by Walpole as one of their 2019 Brands of Tomorrow and by Farfetch as part of the inaugural cohort for its Dream Assembly programme. Founded in 2015 by ex-financial analyst Vanessa Jacobs, The Restory successfully marries the art of craft, the convenience of technology and the intuition of service.

Jacobs’ story began in 2006 when she had just moved to London, where she took her black Louboutin ankle ‘power boots’ to a high-street cobbler. Those boots went perfectly with her favourite suit. What’s more, they made her feel incredible. So imagine her dismay – fury, in fact – when she discovered the cobbler had hammered in a new heel tip that was too big and had split the entire structure from the bottom up.

The fact that Jacobs still tells this story with disbelief, and claims those boots have never truly been replaced, isn’t just an example of a particularly obsessive sartorial heartbreak. It’s also indicative that bad experiences can provide the motivation to make something brilliant. Because, out of this negative cobbler experience, many years later Jacobs found the inspiration for The Restory, her on-demand restoration service for shoes and bags.

The brand will collect your pieces from a location of your choice, carefully restore them and deliver them back. And no piece is impossible for The Restory’s expert staff (at least not yet, anyway). Says Jacobs:

“Whatever problems come in, we are relentless about finding a solution. We try to never say no. We’re constantly experimenting, collaborating and innovating, be it a new chemical solution or a pony hair replacement technique. There are just so many materials and different things that happen to our client’s items.” 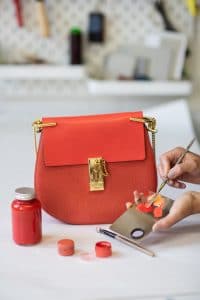 For such a high-end service, this award-winning business had humble beginnings. It initially launched on an old table in Jacobs’ loft where she worked on repairing shoes and bags given to her by other mothers on the school run.

“I had originally thought it would be a retail concept,” she says. “But these women were so excited that I would get invited into their houses and I’d walk out with shoes, bags, belts, jumpers and whatever other thing I thought I could help to repair. In the beginning I was just getting it done any way I could and making sure it looked as great as possible before returning it.” 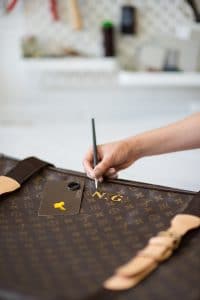 The Restory is now located in a bespoke atelier in west London, where a team are training the next generation of master craftspeople, ensuring they attract, develop and retain the best and brightest people. A typical client can range from a high-powered professional to a stylist, celebrity or any head of the household. Around 20% of recent orders have come from outside London, ranging from Edinburgh to Hong Kong to San Francisco.

Lauded by the likes of Vogue and Vanity Fair, they now have thousands of clients from all over the world. Model-of-the-moment Adwoa Aboah is quoted on Instagram as saying, “I had destroyed my boots at a wedding and The Restory returned them looking brand new.”

One of the most challenging items the Atelier received was a 19th century hatbox, which threatened to disintegrate into dust every time it was touched. The most expensive item was a $50,000, limited edition, pale blue Hermes ‘Birkin’ handbag with a biro mark across the front. “We had to mix five different colours, and clean and hand paint it under a magnifying glass in order to finally remove it,” says Jacobs.  Then there was the brand new Yves St Laurent ‘Kate’ handbag, worth $2,000, which had the corner chewed by an dog who was tired of playing second fiddle to a new baby. 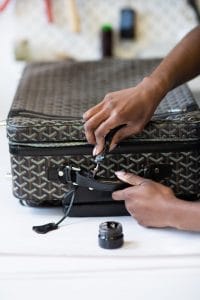 “Aftercare has traditionally been unsexy and too complex for most brands and retailers,” says Jacobs. “But done well, it is inspirational and nurtures long-term relationships.”

Standard cleaning and repair work takes 5-10 working days and advanced services can take about 3-4 weeks. You go online and choose when and where you want things picked up (Londoners receive a 2-hour collection window, and those outside London an overnight window), then your items get returned at a time and to a place convenient for you, all beautifully packaged Net-a-Porter style.

On Saturday 11 May, The Restory is taking part in the Women for Women International #sheinspiresme Car Boot Sale. They are welcoming all donations of shoes, bags and accessories. If you have an item to donate, just get in touch (service@the-restory.com) with The Restory and they’ll arrange a collection. They are providing re-heeling and resoling, so don’t worry if your items need minor repairs – they’ll take care of that!