Maurits Cornelis Escher (1898-1972) is a Dutch artist equally famous for his never-ending staircases and his millions of sales (not to mention the fact that he turned down the mighty Rolling Stones when Mick Jagger requested he design one of their album covers).

To huge numbers of people, Escher’s prints and drawings are instantly recognisable; his intricate puzzles and interlocking forms have been hung and printed around the world on everything from student walls to book jackets. Yet during his lifetime, Escher, the engineer’s son who has been described as “a surrealist who wasn’t a surrealist”, was underappreciated by much of the mainstream art world. Mathematicians, crystallographers and psychologists took great interest in his pictures, however, and his work has featured in various films including ‘Labyrinth’ and ‘Inception’. At last, it seems, some 40 years after his death, Escher finally has a foot in the door of the mainstream art world, with major exhibitions held in London and Scotland in 2015 and a collection of works called ‘Infinite Dimensions’ now showing in Boston, USA, at the city’s iconic Museum of Fine Arts. 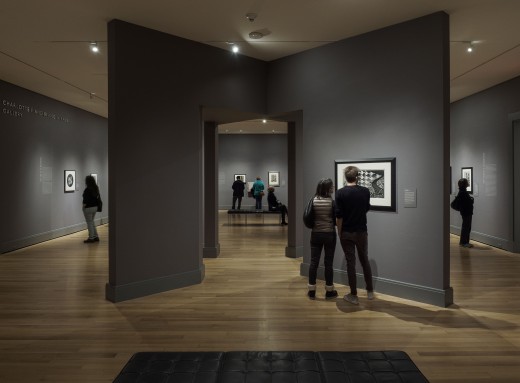 You can wander around the exhibition, which contains 50 of Escher’s works, until 28 May. The collection highlights both the artist’s imagination and his incredible skill, bringing together pieces from both public and private collections. His technical ability is quite mesmerising; seeing it up close was nothing less than entrancing due to both Escher’s pencil work and his eccentric imagination. There’s something quite timeless about these pieces too – Escher’s vision has been said to go beyond the edges of infinity. 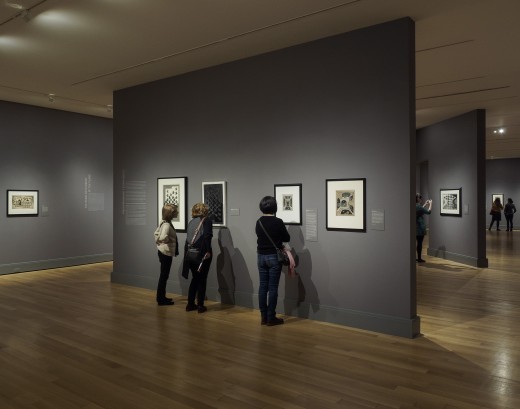 Certainly many of these pieces transcend the immediate cultural concerns of our time and enter into the (much welcomed) realm of playfulness. That’s not to say that they are frivolous – the diligence is clear for starters, but also the mathematical principles used to construct illogical spaces here is anything but simple. Rather it both mystifies and delights simultaneously. 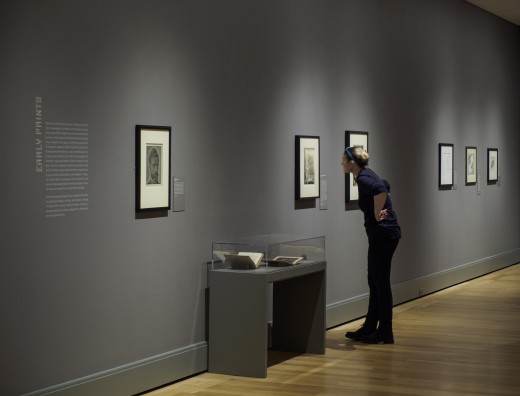 The collection is by no means a complete representation of his range, and those looking mostly for the likes of the never-ending staircases might be a little disappointed not to see more of these optical conundrums here. What is explored more fully, however, are the tessellations (arrangements of repeated shapes that fit together with no gaps) and sphere and water reflections that fascinated Escher. Among the exhibition highlights are: the 13-foot-long ‘Metamorphosis II’ (1939-40), a monumental exploration of the fluidity of time and space in which a chessboard, hive of bees, rustic village and other elements merge into a continuous woodcut printed from 20 blocks; ‘Drawing Hands’ (1948), which plays with the conflict between the flat and the spatial; and ‘Ascending and Descending’ (1960), a special type of optical illusion. Also on view are two Escher works from the MFA’s collection: a lithograph, ‘Contrast (Order and Chaos)’ (1950); and a book of emblems with woodcut illustrations, ‘XXIV Emblemata, dat zijn Zinne-beelden’ (1932). 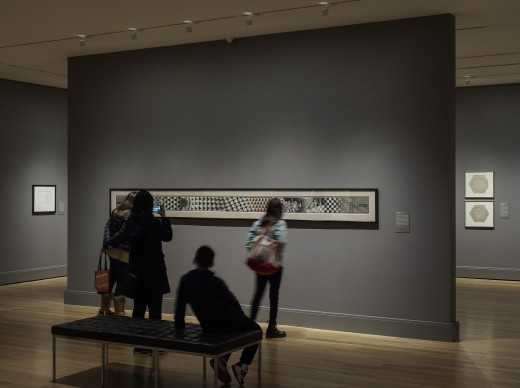