Roy Lichtenstein: Between Sea and Sky

Lichtenstein is best known for his comic book-style interpretations of popular American culture. Among his most iconic works are ‘Drowning Girl’ (1963), currently in the collection of MoMA in NYC’ and ‘Whaam!’ (1963), on permanent display at Tate Modern in London.  His works sell at auction for record prices. In 2012, ‘Sleeping Girl’ (1964) sold for US$44.8 million at Sotheby’s and a year later, in 2013, ‘Woman with Flowered Hat’ (1963) sold for US$56.1 million at Christie’s. 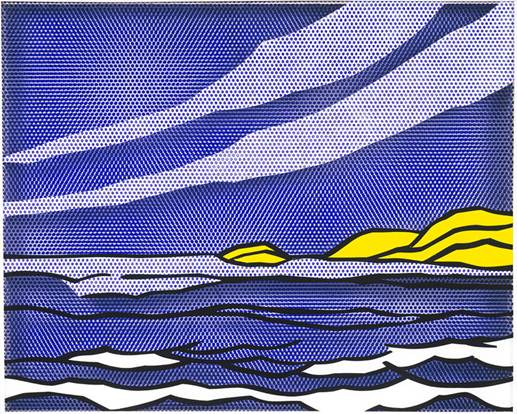 It is less known that throughout his career Lichtenstein also produced land- and seascapes, using his hallmark Ben-Day dots (a 19th century printing technique that involves creating colours out of dots that are either spaced or overlapping). Thirty or so land- and seascapes are included in the current exhibition at the Guildhall in East Hampton. Also on display, in a separate room, is Lichtenstein’s only venture into video art, ‘Three Landscapes’ (1970), commissioned by the Los Angeles County Museum of Art.

In 1970 Lichtenstein purchased a house in Southampton, Long Island. He would spend the rest of his life between this Southampton home and Manhattan. This surprising and delightful exhibition, a collaboration between Guild Hall (curated by Christina Strassfield) and the Roy Lichtenstein Foundation explores the relationship between Lichtenstein and the East End. It demonstrates Lichtenstein’s unique artistic vision and is a rare opportunity to see more than 30 fantastic works from private collections. Get yourself over there.

The exhibition ‘Roy Lichtenstein: Between Sea and Sky’ is on show until 12 October at Guildhall, 158 Main Street, East Hampton NY, 11937.

As we soak up regained freedom of movement and the joy of wandering around reopened galleries, the more time-starved art lovers amongst us should note there are still some brilliant works being showcased online. Two [...]
Art

Art in the Age of Now

Over 40 of London’s most esteemed contemporary artists are taking over a formerly deserted historic building for an exciting new multi-disciplinary exhibition, and admission is free. ‘Art in the Age of Now’, overseen by the [...]
Art

“Being vividly present” is, as Vitor Schietti explains, “one of the simplest yet hardest things to do in our hyper-connected and distracting world.” This focus on presence is at the heart of the acclaimed photographer/filmmaker’s [...]