Some of the most prized accessories are helping to stop violence, support vulnerable communities and fuel long-term peace. From up-cycling bombs and guns, to funding educational programmes and boosting co-operatives, these high-end jewellery brands are astonishingly high impact behind the scenes. In the first of a two-part series, we share a few of our faves.

When you buy Article 22 jewellery, as well as championing the craftsmanship of previously unsung artisans, you’re helping to clear land of unexploded ordnance dropped during the Secret War.

Having seen villagers in rural Laos turning metal from undetonated bombs into spoons, Elizabeth Suda was inspired to set up this community-boosting, and indeed life-saving, enterprise. Named after the 22nd article of the Universal Declaration of Human Rights, Article 22 has been partnering with the likes of MAG (Mines Advisory Group) to turn weapons of war into jewellery for justice. Once melted down at traditional earthen kilns and recast in wood and ash moulds, skilled hands transform the material into bracelets, earrings, necklaces, rings, cufflinks and more, which are sold online and distributed to approximately 150 small partners around the world.

High-profile collaborators including Emma Watson, Angela Lindvall and Massive Attack have teamed up with Legacy of War Foundation to create a collection of powerful necklaces. The ongoing Artist + Activist series is made up of limited edition ‘Peacebomb’ bangles engraved with uplifting mantras and poetic messages of hope. 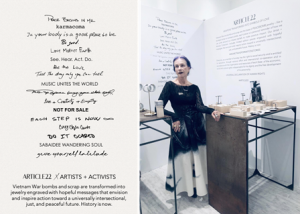 The pioneering social entrepreneur Peter Thum (who is also the founding president of the not-for-profit Giving Water) launched Liberty United in 2013 with his actress wife, Cara Buono. Their ongoing mission is to end gun violence across America by transforming illegal guns and ammunition confiscated by law enforcement into high-end jewellery and accessories.

Every handcrafted piece that is purchased funds non-profit programs to educate and protect young people and provides an LU bracelet to support an at-risk teen who is also committed to stopping gun violence.

This enterprise leads on from Thum’s previous success creating jewellery out of illegal weapons in the Democratic Republic of Congo and Burundi. Fonderie 47 funded the destruction of 70,000 AK47s – removed from circulation in conflict zones – and used them to create thought-provokingly stunning jewellery, watches and accessories. It seems his model for transforming this sadly endless material supply into fantastic limited editions would work universally. 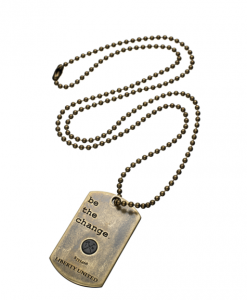