The V&A’s Ocean Liners: Speed & Style exhibition – a look back at when luxury trumped efficiency

The first thing that greets you at the V&A’s Ocean Liners: Speed & Style exhibition is a vast model of the Cunard’s Queen Elizabeth, constructed about 80 years ago and still in astonishingly good nick. It’s no child’s toy, but was used for promotional purposes to wow potential travellers with the magnitude of this floating marvel.

Although it looks at engineering and wider maritime history, this is at heart a celebration of ocean travel at its most glamorous and impressive, when it peaked in the early part of the last century. “No other form of transport was so romantic or so remarkable,” the curators explain, and they do a good job making this case. An 1898 art nouveau poster for the Red Star Line’s by artist Henri Cassiers depicts a smartly dressed young girl and her elegantly attired mother gazing at the ship before them; an image speaking of adventure and possibility available to those who could pay.

We see crockery and couture from the different cruise lines and learn of the leisure activities enjoyed on the top deck, from catwalk shows to afternoon sports and sunbathing. Assorted posters depict ships sailing into dazzling sunsets or atop majestic waves; postcards and brochures speak of opulent floating ballrooms and luxury on the high seas. In one booklet from 1893 for the White Star Line, we learn that the ship’s grand central hall measured 7222 square feet and was adorned with royal velvets, tapestries and rich wood panelling. To the modern traveller, used to convenience over comfort, it is a stark reminder of how different things used to be. 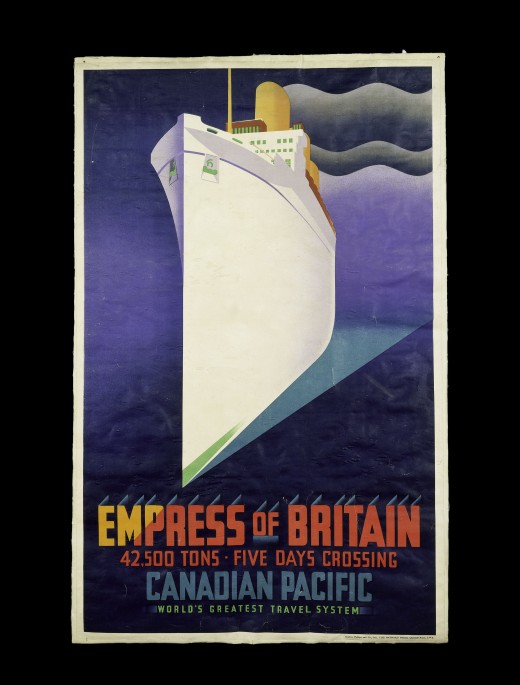 You see in this period the birth of the wider tourism industry; the advertising that sold passage as a dream worth having is a pre cursor to our era of artfully constructed websites and effusive TripAdvisor reviews. The businessmen behind the industry were clearly canny operators, inviting the public to viewings of new ships, recruiting the best new artists to produce the posters, or creating promotional items such as a Cunard desk calendar.

In fact, liners only became about luxury tourism after steerage became less profitable. And while the exhibition does not dwell heavily on it, it does emphasise the role of these gargantuan vessels in the flow of millions of Europeans across the Atlantic, many of them impoverished. The White Star Line, one poster explains, sailed every Thursday from Liverpool to New York. Some of its passengers would have been on a jolly; many more were on board in search of a new life.

As the exhibition shows, the ships were monuments to progress, both in their design and prowess. The great powers were at the time engaged in an endless competition, not least for maritime supremacy, and you feel a little shudder at what is to come when looking at a furiously nationalistic mural on a German ship from 1901.

There’s lots here for trivia lovers, and indeed for children fascinated with transport, from detail about the comparable gross tonnage of different ships to explanations about what was built and where and what happened to the ships after their seafaring days were over. But this being the V&A, mostly it’s about the design of the liners themselves and the lavish furnishings within them, from the blue velvet armchairs that once sat on a French ship designed to evoke the decadence of the Versailles era, to a gold lacquered panel from a smoking room and high spec children’s furniture from a ship’s nursery.

There’s also a peek at the wardrobes of those on board, including a Dior day suit worn by Marlene Dietrich on board the Queen Elizabeth, and a selection of luggage used by Wallis Simpson for crossing the Atlantic (apparently she and her husband once boarded with an excessive 100 bags). 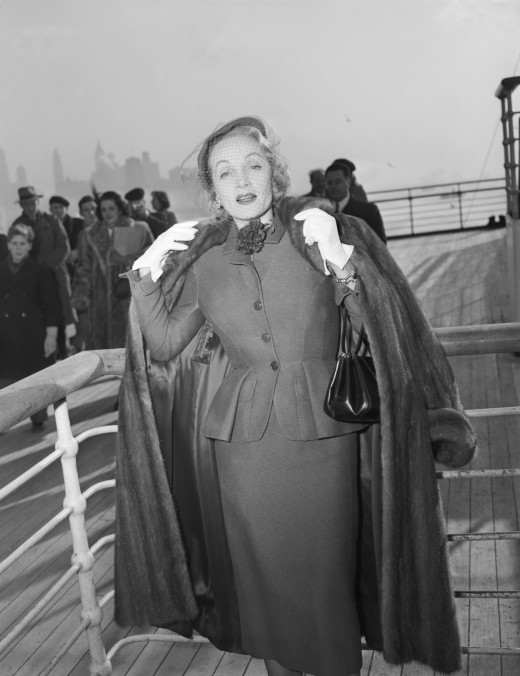 Naturally, there is a reminder of the tragedies that sometimes occurred on the high seas and the most famous Atlantic crossing of all; the ill-fated Titanic. This comes first with a sobering poster offering tickets for the return journey it would never make (third class berths from $36.25) and then with a clip of that infamous scene of Jack and Kate at the end of James Cameron’s film; a cheap stunt, perhaps, but when I visited plenty of people were capitated by it. 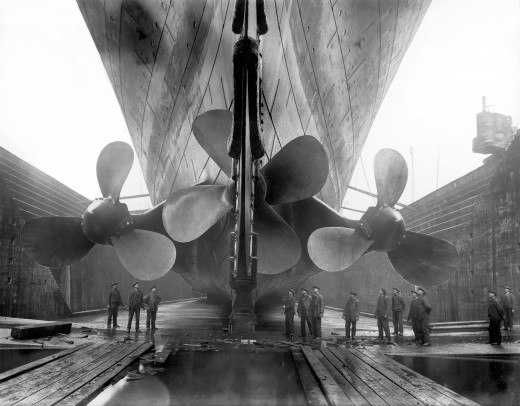 Mostly, this is a nostalgic look back at a mode of travel that once dominated, before air won out in a triumph of function and efficiency over luxury and leisure (although one can equally imagine this exhibition being mounted about the early age of aviation, before economy class and budget airlines took over).

It’s enjoyable, if not particularly enlightening. I would have liked, for example, slightly more focus on life on board for the many who could not afford the best; we see little of how their berths were designed, or indeed anything of the staff digs. A Cunard Line poster from the 1920s hints at this with a cutaway of a ship, baggage at the bottom and the classes piled above (third class still included a smoking room), but you get little more than a glimpse of how the other half sailed.

Still, it’s a small quibble; this is a frothy, crowd-pleasing show offering plenty of spoils.