London Fashion Week always feels too short. But the six days of parties and shows were, yet again, exciting and impactful, full of creative panache and inspired design that culminated in a Tommy Hilfiger show boasting the longest runway and the largest in-person audience of any London show, followed by a truly memorable Harvey Nichols party to close. Let’s not forget Topshop, though, who were reported to be the social media ‘winners’ of LFW, amassing more tags and mentions than Burberry and Hilfiger (see Vogue’s article on Topshop’s unrivalled presence). 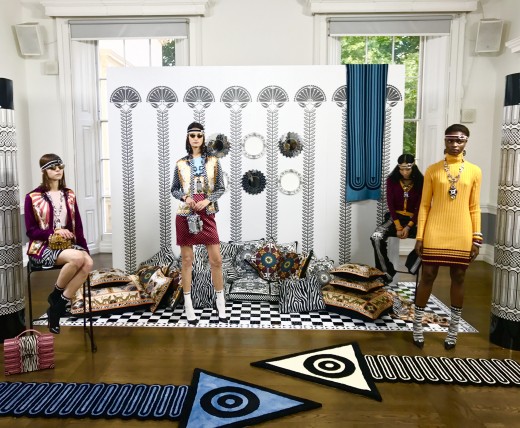 If you ventured within the walls of Somerset House during this year’s LFW, you’d have seen the usual melange of world renowned fashionistas, innovative brand leaders and new upcoming faces. Two of our favourites exhibiting were Scottish-born creative director and designer, Holly Fulton, and Korean-born Eudon Choi. Though best known for his menswear, Choi now merges his understanding of mens and womenswear, merging masculine cuts with feminine sensibility. Both designers launched their labels in 2009 but while Fulton draws on art deco lines and Bauhaus shapes, or pop art painting and psychedelic illustration, Choi finds inspiration in building design – most specifically Eileen Grey’s architectural ethic.

As always, Lawfully Chic had their eye on the more sustainability-minded brand leaders: those focussed on creating and promoting top quality threads with ethical principles at heart. In the ’emerging designers’ area of Esthetica (the Ethical Fashion branch of London Fashion Council), we found knitwear from Wool & the Gang, sweatshirts from Louise de Testa and modular themed pieces (which included the use of cork!) from Flavia La Rocca.

Other highlights included Termite – the eco-friendly glasses whose funky frames are made out of sustainable, recycled or reclaimed, wood – and Christopher Raeburn, whose inspired bombers and parkas involved the use of reclaimed silk from parachutes used in humanitarian air drops. Total genius!