Unit London’s first ever online exhibition, ‘Drawn Together’, launched recently with works from more than 100 international artists who were asked to return to paper in order to illustrate their support for those in need due to the pandemic.

Created to raise awareness and funds for frontline medical staff and vulnerable communities worldwide, the exhibition is estimated to be reaching more than 10 million people online globally.

Passionate artists-turned-directors Joe Kennedy and Jonny Burt founded Unit London in 2013 on a mission to highlight emerging and innovative talents in “an often opaque and impenetrable art world”. Their flagship 6,000 sq ft Mayfair space opened in 2018, as they established themselves amongst the traditional major players. But against a backdrop of exclusivity and elitism, Kennedy and Burt’s belief in making art accessible to all whilst ‘bridging the gap between the physical and virtual’ meant they were set to stand out from the start. 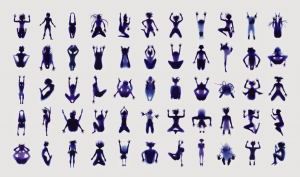 Unlike their more conservative contemporaries they harnessed social media rather than shunning it and ever since they’ve been using the likes of Instagram as a borderless platform to tell the stories of some of the most gifted artists. Now of course they’re way ahead, engaging home-based audiences and showing that contemporary art can retain its cutting edge whilst also being inclusive. You can join Unit London and co every Friday at 5pm live on Instagram with an artist in quarantine.

Drawn Together is showing until 12 July 2020: https://theunitldn.com.