A trip down memory lane

The House of Illustration is a relatively recent addition to London’s museum scene, having opened just last year. Nestled between trendy brunch spots and overgrown construction sites at Kings Cross’ Granary Square, it’s unlikely to be somewhere you would simply happen upon.

But it is worth seeking out, particularly before the end of this month to see the ‘Ladybird by Design’ exhibition. A display of images celebrating 100 years of the famous children’s imprint Ladybird, it’s a sweetly nostalgic look both at how illustration is used to elevate a story beyond the pages, and at how Britain once understood itself. Alongside scattered examples of the books themselves – ranging from Baby’s First Book to Peter and Jane or those for older children – the curators have pulled together more than 120 original illustrations from Ladybird’s heyday between the 1950s and 1980s, including initial sketches and full colour prints.

It’s a colourful, delightful end product, endlessly fascinating for children but with plenty to catch the eye of the adult visitor as well. Most of us will well remember Ladybird from our childhoods; the flimsy pocket-sized books with the striking black text, the stories of bright eyed adventurers, the primary coloured illustrations that helped expand our vocabularies, or the drawings of animals and birds that were as faithful as any photograph. 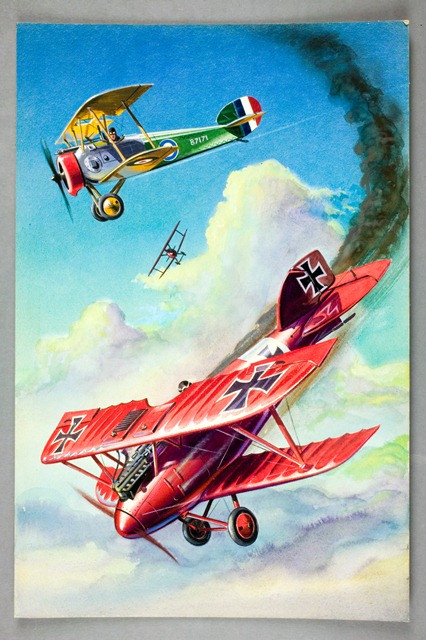 What the exhibition makes clear is that Ladybird covered nearly everything; there were books about inventions, about exotic foreign countries, about heroic figures like Churchill or Florence Nightingale. Using rich illustrations to capture the imagination, Ladybird taught children their ABC, condensed history into bite-size portions, and guided them through science experiments and card trips. They covered the most mundane, ordinary subjects – life in the mines, jobs at ‘the big store’ or in the gas, water and electricity industries – as well as more dramatic milestones such as man on the moon or the invention of air travel. And they presented a firmly optimistic view of the world, one where everything was there to be discovered and experienced.

Nowadays first editions are collectors’ items, and the tales told in them seem unlikely to appeal to a generation used to grittier or more interactive fare. The characters – overwhelmingly white, rosy cheeked and comfortably off – come across as sanitised and one-dimensional (and that’s not to mention the travel books, with inevitably stereotypical images of Africa and India). In the storybooks and ‘how to’ guides, the girls are fair, prissy and wear bows in their hair, the boys are audacious and outdoorsy. Like a modern marketing exercise, the former generally wear pink while the latter appear in blue, even if what they are wearing is largely in keeping with the fashions of the time (I liked the woman in go-go boots from an early 1970s illustration). 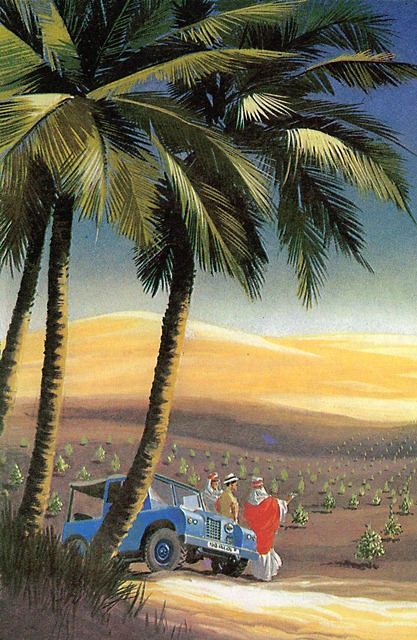 And the adults in the illustrations are trite almost to the point of parody, it’s like something Don Draper dreamed up. There’s Father by the car, or smartly suited in his office on the phone. There’s Mother, in the kitchen contemplating a domestic task (or potentially whether it’s time for another glass of wine).

But despite being old-fashioned, it’s still a pleasure to see these drawings. Like Norman Rockwell‘s illustrations of the all-American family in the 1930s and 1940s, which shored up the cultural identity during the Depression, they clearly served a purpose in post-war Britain. Harry Wingfield’s 1958 series ‘Shopping With Mother’, depicting a trip to the grocers, bakers and fishmongers and full of joy and promise, might seem saccharine now but to a generation only recently out of rationing the appeal makes more sense.

So this is as much an exploration of how Britain was, or at least how it wanted to be after the war, as it is a history of the books themselves. The Ladybird books and their vivid illustrations presented a confident, patriotic country with a proud history, at the forefront of change and invention, a country of harmony and happy families. Like Norman Rockwell 20 years earlier, the illustrators drew life as they or their publishers felt it should be, and left out the darker parts.

I say illustrators, but the likes of Wingfield or John Berry or Robert Ayton were classically trained artists albeit working commercially. Having been round the exhibition, there’s no denying the artistry and skill that went into the Ladybird books, especially the nature and travel series. And if the artists themselves have been forgotten, their work – familiar and significant to a good few generations – makes for quite the legacy. A charming trip down memory lane, and one to catch while you still can.

Ladybird by Design is on at the House of Illustration, Granary Square, until 27th September.