Waterhouse & Dodd presents a new solo exhibition of Jean-François Rauzier’s Hyperphotos. This French artist was discovered in 2009 by the gallery’s owners who were immediately fascinated by his work. How could one not be enchanted by the fantasy world created by Rauzier?

His large format photographs, called “Hyperphotos”, in reference to the hyper-realistic painters, combine thousands of photographs, digitally stitched together. Rauzier, who started his career in advertising more than 40 years ago, explains that he initiates the process by taking shots of a particular building or scene from every possible point of view. One can see from the variety of work exhibited that the originality of his work comes not only from his choice of venues, objects, characters or animals but from the story he creates behind each work. 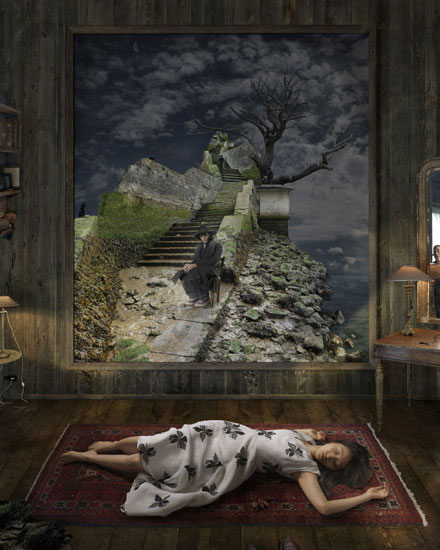 He composes his photographs like a music composer would create a symphony: he uses original images, adds details to the scenes, creates patterns, repetitions and juxtapositions of buildings, people, animals, objects and then deletes some of the images in order to create the final piece. Following a quick conversation we had the other day at the gallery, I am convinced that he fully enjoys the process from start to end. There is a real sense of freshness and playfulness in his approach.

The result is that the world that we have in front of us has been de-constructed and re-constructed many times: it is no longer the reality we know, the venue and objects sound familiar at first but we are soon transported into a dream-like world, a mysterious and poetic universe in which we, the viewers, are like performers.

Rauzier’s imagination is limitless. In the new “Animal series”, he assigns types of animals to certain monuments (raccoons in Piazza San Marco, flamingos in front of Notre Dame…). The result is so spectacular that one of these Hyperphotos, “Jeux de cirque”, which shows thousands of lions in front of the Colosseum in Rome, has recently been selected as “Picture Story of the Week” in the Sunday Times (News Review, 8 May 2011).

My favourite pieces remain his more intimate works, such as his new Hyperphoto, “Traversées” and the series “Les Belles Endormies” already shown in his 2009 solo exhibition.  In “Traversées”, we see a solitary man walking under a “reconstructed” maze of bridges. The man is Rauzier. The artist often appears in his photographs as a mysterious man dressed in black (“the man in black” as he calls him) which I find close to the character of the “bowler-hatted man” in Belgian surrealists Magritte and Paul Delvaux’ paintings.

In the series “Les Belles Endormies”, Rauzier creates 16 different “tableaux” inspired by Japanese writer Kawabata’s book “House of the Sleeping Beauties”.  Each work has a different atmosphere and is located in a different venue with different objects. Every time you look at the work, you discover new details, and “foreign” or odd elements appear from the scene. What is fascinating with Rauzier’s work is that it contains so many layers both technically and intellectually. There are so many images and so many references, obvious or less explicit, to literature and art history.